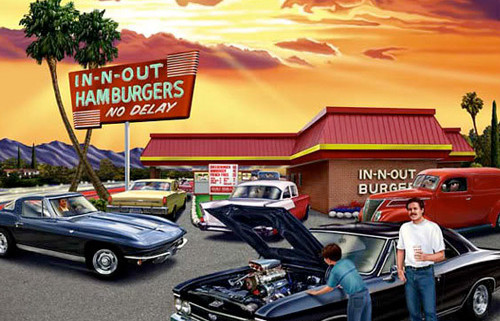 The other day I was noticing how much more I enjoyed getting a hamburger at In-N-Out Burger than I did at McDonald’s. Obviously the simple taste of the food, price and time of delivery were all important.

I noticed another even more important aspect of my visit… the young people who worked there truly enjoyed each other’s company even while they were working. The “Supersize” factor just didn’t apply. Everyone was simply EMOTIONALLY AWARE of what they needed to do and just did it. More importantly, the staff not only liked their job for the money it produced, they seemed to be in love with the idea of being in the company of each other. They were aware of their friendships as a part of the job and as a part of their own individual identities.

In-N-Out ownership was clearly on the purpose and achieved the single most important goal of the workgroup… producing good food. It was taken for granted those young people would produce good food. The idea that I would return for another meal was not. The one thing I noticed was that no matter how many people were waiting for food (and there is almost ALWAYS a long line) there was the complete absence of fear combined with the absolute awareness of purpose in delivering my meal with a smile.

Peace of Mind becomes the natural state of mind in which a the desired business product flows from a well ordered delivery of purpose. Establishing orderly direction can conquer the emotional state of fear. Alignment of purpose becomes powerfully constructive. Delivery of purpose brings emotional well being. Fear of loss becomes a powerful motivator used by competitors to psychologically control and conquer their foes.

Napoleon Hill in his book “Think and Grow Rich” says that as a member of a “Mastermind” group, we become capable of creating a completely separate living human consciousness outside the group. A “being” in the spiritual realm that guides and regulates group interaction, thought evolution and group achievement.

Rapport at the group level is grossly under valued in the daily lives of humankind. Everyone seems to be obsessed with either claiming credit or assigning blame.

Try this: the next time you are competing for a lane on the freeway with someone, just slow down a little and let them in. It’s amazing how much nicer all the other drivers seem to become. This type of volunteerism for social order is what I like to call “associative kindness” and naturally leads to the emotional reward of peace of mind.

A by-product result of associative kindness is conflict resolution and harmonious human interaction.

This “precessional effect“, as the great thinker Buckminster Fuller defined it, is an unplanned, unexpected and unintended goal attainment. It can be explained as a group level serenity and peace of mind that is produced by one group of participating contributors, actively engaged for their own harmonious human interaction which positively affects a completely divergent group of non-participatory benefactors.

Create for yourself a mental picture like this… a multitude of circular waves on a still lake emanating from a pebble when dropped into the water. All groups whether public or private have unlimited and unintended affects on the social consciousness in a public domain. Never underestimate the power of emotions to influence the product of work groups on a clearly defined purpose.

The reason it is even possible to create peace of mind in a seemingly obvious zero sum game of the burger industry is this: Excellence is its own standard and reward.

There simply is no competition for those who knowingly produce a superior product through a well ordered, peacefully thought out business model. Without competition, there is no fear and greater cooperation naturally follows thus attracting more of the same results.

Ahhhhhhh Peace of Mind… Sure … I’ll have some fries with that!

Kevin Haumschilt works in American Industry as an Entrepreneur. Kevin is a loyal and dedicated Money and You graduate who lives in San Diego California with his wife Itzi (ageless), and children Sophia age 13 and Trevor age 10. You may reach him on Facebook or by email @ imin@cox.net